With its new slot game title, RealTime Gaming pays tribute to the legendary Chinese empress, Wu Zetian. This empress went down in history as one of the most powerful women who have ever lived. Wu Zetian online slot was published at the beginning of 2019. Now, it’s already one of the leading slot games on the market. You can enjoy this outstanding title with luxurious design in many online casinos. Of course, you can play the slot both for real money and for free in practice mode.

Chinese empress Wu Zetian was known for her exceptional beauty, great wisdom, and many talents. But do you know what Wu Zetian online slot is known for? Well, it’s known for its sky-high RTP, numerous paylines, impressive jackpot, exciting gameplay, and dazzling design. Are you ready to explore all of these aspects of Wu Zetian slot and go on a quest to uncover the great wealth of this enchanting Chinese ruler? We hope that you are since we are about to dive into all the details about this amazing RTG game!

Honor and Riches: What to Expect From This New RTG Slot?

What Wu Zetian’s subordinates could expect from their ruler was cultural prosperity, progress, and of course, a firm hand and harsh penalties for disobedience. Unlike real-life Wu Zetian, the empress from RTG’s slot is much kinder, more gentle, and warm-hearted — she grants huge prizes on each of the five reels! You can launch this exciting slot by clicking on the following link and claiming 25 Free Spins to test the game in royal style!

This RTG’s online slot machine has a 5×3 classic layout, 95.5% RTP, 25 paylines, and a $125,000 maximum jackpot. You can win numerous additional prizes by getting the wild symbol, giant symbols, scatter symbols, or colossal icons. In these special prizes, tens of free spins are hidden that make playing Wu Zetian slot an exceptionally rewarding experience. For instance, when the Golden Gong symbol comes up on the reels three to five times, you get five free games. Now, this slot comes with a nice range of betting options. The lower betting limit is $0.25 per line, while the upper limit is $62.50. Since we’ve introduced you to the various features of this game, let’s talk more about its art and design. Also, let’s learn about the story that inspired the game.

The Tale and Art of Wu Zetian Slot Game

The life of Chinese empress Wu Zetian, one of the most famous female sovereigns ever, inspired this new and charming RTG slot. This empress was the only woman that started her own dynasty in ancient China. The story of her long and prosperous rule started after her husband, emperor Gaozong died. As Wu Zetian became the empress of China, literature, music, culture, and art flourished. Of course, this wasn’t a great surprise since she was famous for her poetry and musical talents. 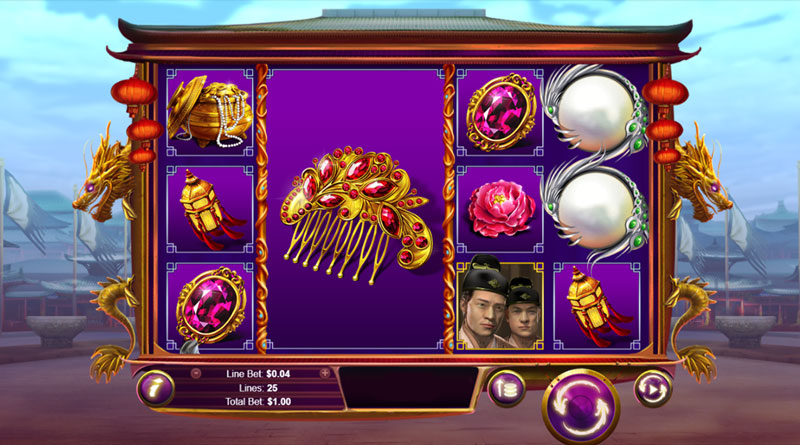 Besides being a lover of the arts, this empress was also inclined toward stern rule and authoritarianism, so she soon built an image of a feared empress. However, this RTG slot tells a tale of beautiful and pleasant things from the empress’ life and rule. RTG designed the game to depict the richness, luxury, and the beauties of Wu Zetian’s world.

Wu Zetian online game features creative design and exceptionally rich visual content that is typical for RTG games. Both visual art and sounds of this RTG release take you away to the world of ancient China, regal lifestyle, and all the luxuries that come with it. When you launch this game, you will immediately be swept away by the immortal beauty of the empress, authentic Far Eastern atmosphere, and of course, numerous prizes. Now, since we’ve already mentioned those great prizes, let’s take a moment to talk about them.

Wu Zetian’s Wealth: How Much Can You Win With Wu Zetian Slots?

With Wu Zetian slot, big wins are only a spin away! Among numerous charming prizes that you can trigger, you can win as much as 50,000x per bet line! Now, regardless of your stake, 50,000x per bet line has to be serious money! In this game, many symbols hide great and luxurious treats, and it’s fun to hunt them down through the reels. But which symbols on the reels are especially generous? Are you ready to find out how much money you can win with this slot?

Golden Gong is a very special symbol that can bring you a lot of joy! This symbol triggers five free spins. So when you get a regular-sized Golden Gong to appear three to five times, you trigger free games! However, these scatters need to appear on consecutive reels. Among many wilds, wild Pearl in Wu Zetian shines with an exceptionally bright light as it often appears as a giant symbol. Moreover, giant symbols are quite common for this slot, probably because the game wants to depict the prosperity of Wu Zetian’s era. These icons can take up anything between 3×2 to 3×5 reels. Now that we know that this slot can make you rich, let’s learn how to play it!

Dancing With the Empress: How to Play Wu Zetian Slot?

In ancient China, getting anywhere near the powerful Wu Zetian was hard — almost impossible. However, thanks to RTG, nowadays, you can meet this beauty in the comfort of your own home. To play this fun game for money or for free, all you need is either a PC or a mobile device, and that’s pretty much it! Numerous online casinos have this new slot, and you can find it easily. Of course, the ideal way to launch this game is to claim the free spins bonus through the link. As you may remember, we’ve provided the link at the beginning of the article.

Accessing this game at a casino or through clicking our bonus link is the first step. The next thing you need to do is set your bet. The betting limits for this game allow you to play both with low and high stakes. As you know, this slot doesn’t ask you to bet a lot of money per line. The bottom line is — with Wu Zetian, your online casino time will be more exciting, more rewarding, and absolutely glowing with charming vibes of ancient Chinese culture.

Wu Zetian slot is already loved by many online casino players; it has high RTP, grants free spins, and comes with a fantastic jackpot. Also, you can claim a great bonus for this game through our link. Now, besides all of the great features we have mentioned, the slot also has outstanding visuals and audio. Plus, the game has a fair betting range, and it’s easy to figure out its rules. All in all, Wu Zetian is truly a royal slot worthy of its name.